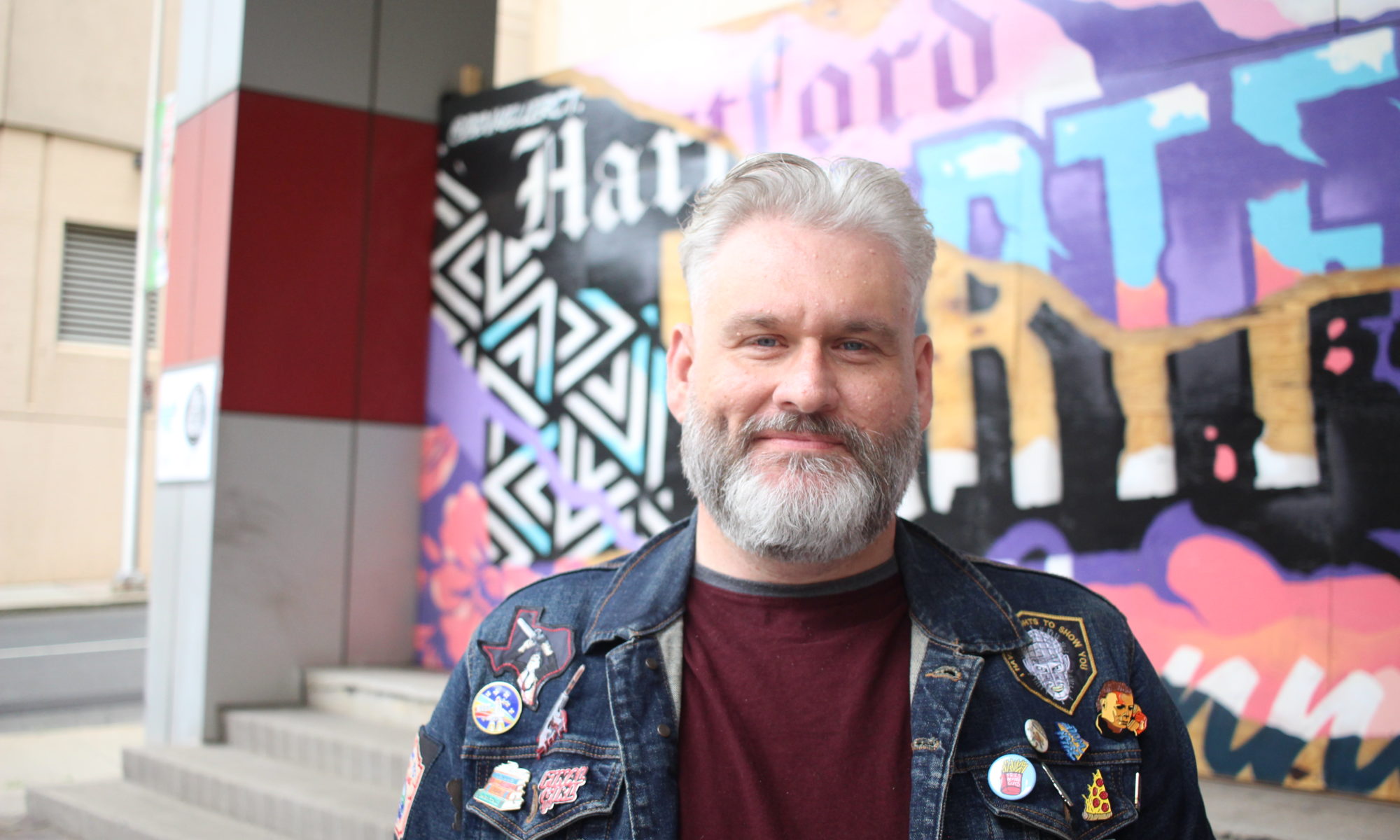 Cody Daigle-Orians (he/they) is an asexual writer and educator living in Hartford, Connecticut. He is a member of The Ace and Aro Advocacy Project, a Washington, DC-based organization providing resources on asexuality and romanticism to the public. And he is the creator of “Ace Dad Advice,” an online project that aims to help young people and those questioning their sexuality find the courage and confidence to live their best ace life. An “Ace Dad Advice” book will be published in January 2023.

I had the opportunity to interview Cody, which you can read below.

I’m an asexual writer, educator and content creator living in Hartford, Connecticut. Before I started this work in ace advocacy and education, I wore a lot of professional hats: I was a theatre artist for many years (playwriting and acting), I taught high school theatre, I was an arts writer, then an arts administrator and arts programmer. It all comes together in my ace-related work. I’m also a giant horror nerd (film and fiction) and a book hoarder.

Online, are you known for Ace Dad Advice, a digital platform where you dispense advice and information about asexuality and the asexual community. Could you tell us how this project came to be and how you came up with the name?

It started with my barber telling me I had to download Tik Tok. I balked at first, because in my mind, Tik Tok was “for the kids.” But I did anyway, just for kicks. I made a video where I self-identified as asexual, and I got this flood of comments, mostly from younger ace folks, saying they’d never seen an older ace before, didn’t know we existed, that they never saw ace adults living their lives like that. It took me by surprise, and I thought, “Maybe there’s a space in this community I can fill.”

I’ve always sort of had this “dad energy” about me, so I thought, “I’ll just be Ace Dad and give the kids advice like a dad would.” And it’s taken off. “Ace Dad Advice” is one part ace education, one part ace advice column, and one part ace pep talk from a mentor.

As a queer person, how did you find yourself coming into realization of this part of your identity?

I didn’t come out as asexual until I was 42, and I discovered asexuality on Tumblr. I always knew asexuals existed, but (like most people in and out of the queer community) I had a skewed idea of what asexuality was. Tumblr introduced me to the nuance of asexuality and the stories of ace people. And in those stories, I saw myself clearly for the first time.

I’d always thought of myself as a gay man, since that was the label that fit the best. But it wasn’t exactly right. So I saw myself as a broken gay man, a not-quite-right gay man. Finding asexuality helped me see that I wasn’t a “broken” anything. I was ace. And that was whole and valid. really thankful for Tumblr.

Within the queer community, there’s almost a dearth of queer elders thanks to the HIV+ epidemic and other factors. How does it feel being seen as an “elder” in terms of being a queer ace educator and Ace Dad?

It’s amazing. When I first came out as gay when I was 18, I had some really incredible older men who helped me navigate queerness. So mentors were incredibly important for me growing up, particularly growing up as a queer person in the Deep South. (I’m originally from Louisiana.) I wouldn’t have made it through some of the tough stuff in my twenties had it not been for the elders in the community.

So I feel like this is an opportunity for me to pay back the elders that helped me when I was younger. It’s my opportunity to assume that role and help younger ace folks where and when I can.

As of now, you are currently working on a book inspired by Ace Dad Advice. Could you tell us how the book came to be and what readers can expect from it?

An editor from the publishing company reached out and told me they really liked what I was doing with the “Ace Dad” content and asked if I’d ever thought about turning it into a book. I jumped at the opportunity.

The “Ace Dad Advice” book is going to feel a lot like the online video content: ace education, ace advice, ace pep talks. The goal is for it to be a resource readers can go back to for encouragement and empowerment whenever they need it. So they feel they always have someone in their corner helping them live their best ace life.

What are some basic truths asexuality and queerness you would want people to take away from this interview?

The most important thing I try to communicate in all of my content is: we are not broken. Ace folks aren’t missing something. We aren’t a damaged version of something. We aren’t a liability. We are fully valid, fully whole people living an ace experience. Our aceness doesn’t limit us. It’s just one facet of who we are and what we bring to the world.

For someone new to the asexual community, what resources would you recommend checking out?

The Asexuality Visibility and Education Network (AVEN) is a terrific resource, as is The Ace and Aro Advocacy Project (TAAAP). I work with the folks at TAAAP, and they’re amazing.

If you’re book-inclined, I’d recommend The Invisible Orientation by Julie Sondra Decker and Ace by Angela Chen. Both books are wonderful resources to learn about asexuality.

Who are some other ace activists you would recommend others to know about?

If you’re not following Yasmin Benoit (@theyasminbenoit on Instagram), you should be. Her work is really important and her voice is essential.

I love the folks at the Sounds Fake But Okay podcast, Elle Rose (@scretladyspider on Twitter), Asexual Memes (@asexualmemes on Tik Tok), and Gentle Giant Ace (@AceGentle on Twitter).

The ace creator on Tik Tok that deserves a ton more followers is @visibly_ace. Her content is so thoughtful. I think she’s amazing.

There are so many other folks doing great work. This is just a handful.

Ask me about my favorite horror books of 2021! They’re not ace related, but if you want to read some of the best horror of the year, check out My Heart is a Chainsaw by Stephen Graham Jones and Cackle by Rachel Harrison. Very different books, but I loved them both.

Can you tell us about any other projects you are working on and at liberty to discuss?

Just have to finish the book! Then I can focus on some new stuff. But I’ve got some ideas.

I want to shout out an amazing anthology called Fat and Queer edited by Bruce Owen Grimm, Miguel M. Morales and Tiff Joshua TJ Ferentini. I loved the pieces in it. Really moved me. I also loved the YA novel The Reckless Kind by Carly Heath, which has some wonderful ace representation.

And while it’s not necessarily queer, it’s close enough to count: If you haven’t listened to the podcast Out For Blood, which lovingly documents the entire incredible story of the Broadway production of Carrie the Musical, you are missing out. It’s brilliant. It’s got tons of interviews with the original cast. And it’s got so much dirt on an infamous Broadway flop. It’s unmissable.