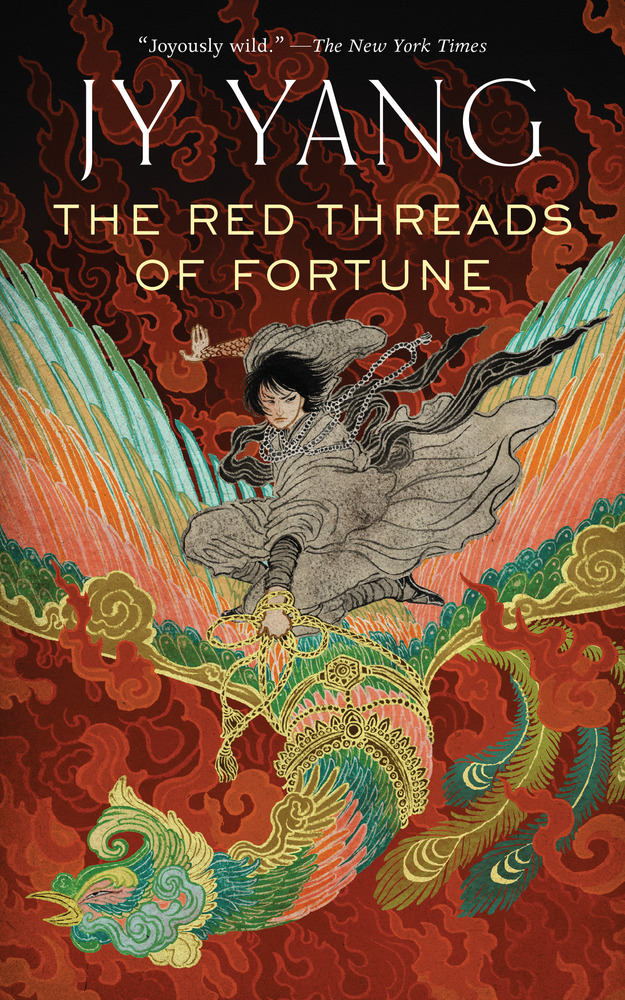 The Red Threads of Fortune by nonbinary queer Singaporean author JY Yang picks up four years after the events of The Black Tides of Heaven and centers on the prophetic twin Mokoya. Where Black Tides was a coming-of-age story that takes place over several years, Red Threads is a story of grief and redemption told over the period of a few days. The sharp contrast in structure between the two novellas enables the exploration of different themes and accentuates the contrast between the twin protagonists.

Through much of book one, Akeha’s perspective of Mokoya’s life was that she was lucky. She had her prophetic visions, a beautiful loving partner in Thennjay, and a purpose in their mother’s protectorate. Early on in book two, it is revealed that the prophecies were always more of a curse as far as Mokoya was concerned. She was able to see visions of the future and yet nothing she did in the present could ever change the outcome. Ultimately it just made her feel helpless; as though she lacked any agency over her own life. In spite of all of that, after the accident and her daughter’s death, she finds herself missing the prophetic visions that no longer visit.

At its core, The Red Threads of Fortune is a story about the complicated and often contradictory ways that people deal with grief. The loss of a child is a particularly acute form of trauma, and four years after Mokoya still has not really moved on. She used Slackcraft to graft her daughter’s soul onto a raptor whom she aptly named Phoenix. She left Thennjay and spends her days recklessly hunting naga. She is paralyzed by unpredictable and overpowering memories that seem to come and go at will, much like her prophetic visions once did. It is within this context that she meets Rider.

Rider is a practitioner of Slackcraft from the Quarterlands who rides a tamed naga. When Mokoya meets them in the Gusai Desert, they are on a secretive mission of their own. When a massive naga attacks the Mechanist stronghold city Batanaar, both Mokoya and Rider are pulled into the thick of the conflict to save the city. As their unique bond develops, Mokoya is forced to confront her own feelings of helplessness that have plagued her since childhood.

The Red Threads of Fortune takes an unflinching look at grief and its lasting effects. Mokoya is in many ways a prisoner of her past, and before that she was a prisoner of her prophetic visions of the future. While the story takes some unexpected turns, the plot itself is resolved in the end, and the underlying themes left me with some resonating questions: How much control should we allow a past we can’t change to hold over us? How many of us believe we are powerful enough to change our fate? They are the sort of questions that individuals must answer for themselves, just like Mokoya had to.

It’s with this powerful theme, built on the world-building foundation of Black Tides, that The Red Threads of Fortune elevates the Tensorate series to a whole other level.

Next up: the third novella in the series: The Descent of Monsters. 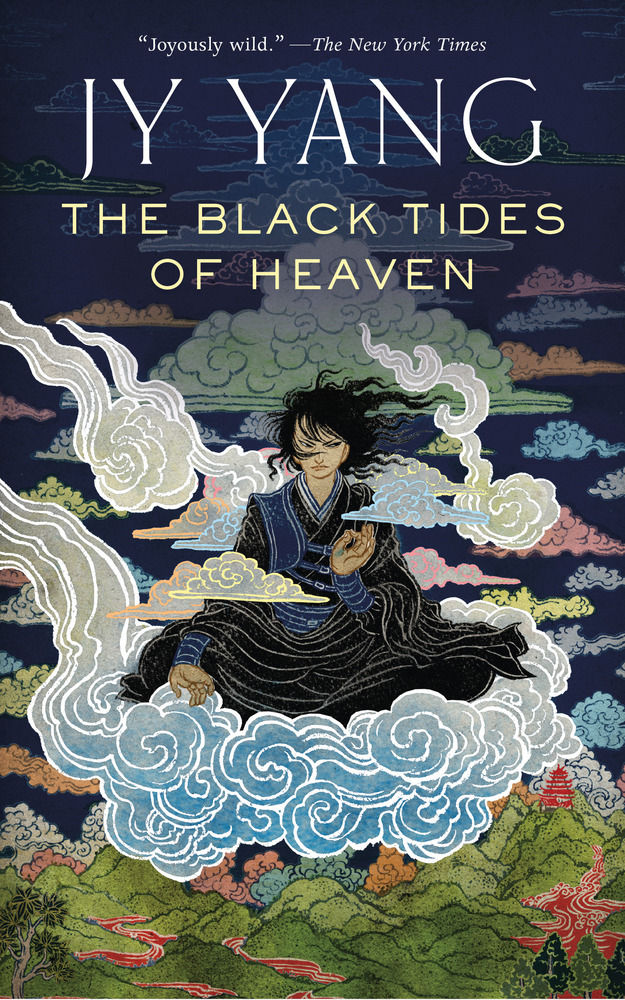 The Black Tides of Heaven by nonbinary queer Singaporean writer JY Yang is an impressive feat of both subtly and depth. While fantasy isn’t usually known for its brevity, Yang manages to deliver a richly textured world packed with fascinating characters in a single 236-page novella. Thankfully, this is the first of three  in the Tensorate series.

The story focuses on the twins Akeha and Mokoya, and spans 35 years from beginning to end. Akeha and Mokoya are the children of the Protector, a ruthless matriarch who rules her Protectorate through intimidation and bloodshed. The plot begins to take shape when Mokoya has a series of prophetic visions, which prompts their mother to try to use her child’s gift to her own advantage. While both twins are featured heavily in the early chapters, the narrative is driven primarily by Akeha’s journey. With all the attention on Mokoya, Akeha eventually flees their mother’s protectorate to forge his own path.

One of the most fascinating details of this world that Yang has created is that children are not assigned genders at birth. We see this play out in a number of unique ways throughout the story. Some children choose very young, others wait until much later, and others still choose to remain somewhere in between. Both Akeha and Mokoya, for instance, each use gender neutral pronouns for the first two parts of the book.  The cultural norm is to recognize gender as something that comes from within, and that in and of itself is a beautiful thing.

Beyond its fluid beliefs on gender, the society within the Protectorate suffers from massive wealth inequality. The greatest source of power in this world is the Slack, which draws its energy from different parts of nature. The way people wield this power is reminiscent of the Force in Star Wars, but as the story goes on, Yang gives a sense that it’s much more complex than an energy that binds the universe together. While most secrets of the Slack are kept secret by the Tensors, they are facing an uprising from the resistant Mechanists. The seeds of this war are sewn in the early chapters and gradually take route throughout the story.

Although the book is short, the story itself is large and expansive. The details are intricate yet never overwhelming.  Yang has managed to bring to life a vivid world by only showing us exactly what we need to see. Lucky for us, there are two more novellas after this one: The Red Threads of Fortune and The Descent of Monsters, coming in July from Tor.