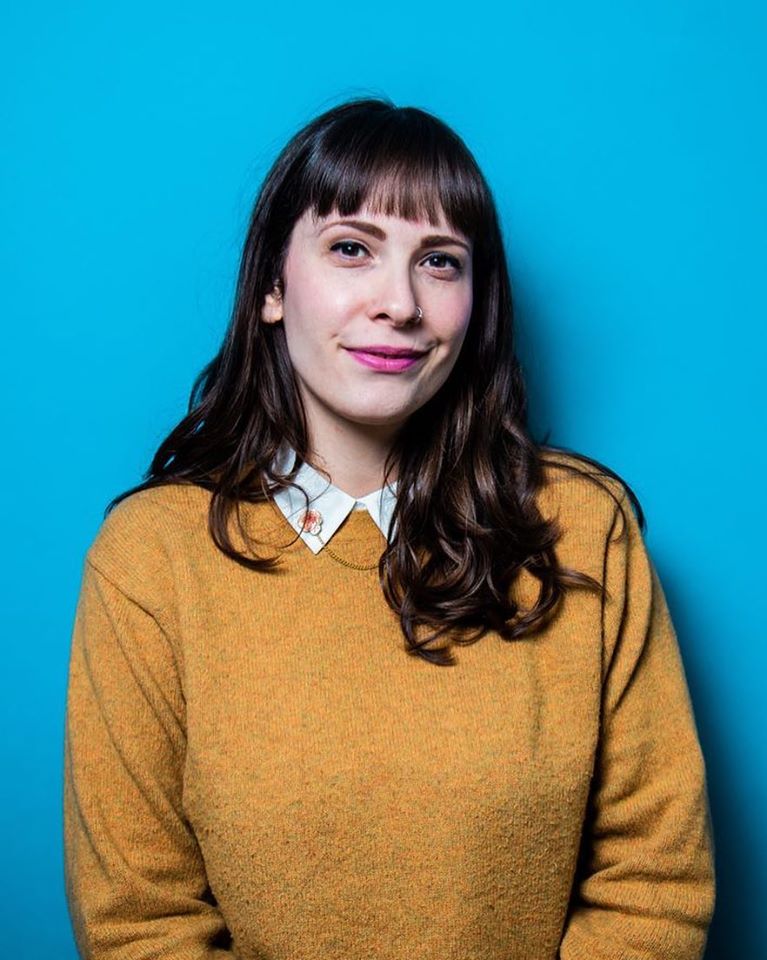 Stephanie Cooke is an award-winning writer and editor based out of Toronto. She’s a comic book fan, avid gamer, movie watcher and lover of puns. She is a purveyor of too many projects and thrives in chaos. Her writing work is featured in Mark Millar’s “Millarworld Annual,” “Wayward Sisters,” “The Secret Loves of Geek Girls,” “Toronto Comics Anthology” and more. Her debut graphic novel, “Oh My Gods!” released in January 2021 from HMH Kids, and a sequel will follow in fall 2021. She’s also a crazy cat lady who happens to be terribly allergic to cats. As such, she settles for having just the one cat and takes a lot of allergy medication. I had the opportunity to interview Stephanie, which you can read below.

Sure thing! I’m a writer and editor that primarily works on comics and graphic novels. I’m based out of the Great White North (or sometimes partially south of some folks in the U.S.) in Toronto, Canada. Oh My Gods! is my debut graphic novel with Insha Fitzpatrick, Juliana Moon, and Whitney Cogar. And my second graphic novel ParaNorthern just came out! They’re both middle grade stories that I firmly believe anyone can enjoy.

What inspired you to create comics? Were there any comics or artists you believe who inspired you and/or influenced your style?

I’ve been reading comics for most of my life, so it’s a medium that I’ve always loved and been drawn to. I’ve also written in some capacity or another for as long as I can remember. As to what inspired me to write comics specifically, I’d been podcasting, reviewing comics, writing articles, etc. for entertainment websites, and during a convention I was attending (after having been in the industry already for five to six years), someone asked me why I didn’t write comics. I knew other creators, publishers, the ins and outs, etc. and I didn’t have a good answer for that. Why didn’t I write comics? It changed something in me and pushed me to start. It turned out to be a perfect medium to channel my creativity into and I love it.

I think there are a lot of things that inspire me, not necessarily always comics. Some of the things that I think I aspire to are things I’m just generally a big fan of like Lumberjanes and Nimona. I also love Cucumber Quest by Gigi D.G., The Adventures of Superhero Girl by Faith Erin Hicks, and Hark, A Vagrant! by Kate Beaton. Plus, I’m absolutely in awe of everything Raina Telegemeier is doing. And outside comics, I think a lot of animated shows have inspired me, too, like Gravity Falls and Star vs. the Forces of Evil.

I don’t think any one of those directly influenced my style or voice, but rather they helped me figure out the things I wanted to include in creating my own unique voice.

Where did the inspiration for ParaNorthern: And the Chaos Bunny A-hop-calypse come from?

I think it’s a mish-mash of things but definitely one of the big bits of inspiration was Monty Python and the Holy Grail. The Killer Rabbit of Caerbannog was a big reason why I wanted to incorporate mischievous rabbits into the story here and have them be part of the overall mayhem. I really loved the idea of something innocent and sweet seeming to be a thing that causes so much damage and destruction! But then more generally, I love supernatural stories and was a big fan of the TGIF programming on ABC when I was growing up. Sabrina the Teenage Witch was something I watched at just the right time of my life to really stick with me and heavily influence my humor and brand.

ParaNorthern: And the Chaos Bunny A-hop-calypse looks perfect for those who are fantasy/Halloween fans of Scary Godmother (Jill Thompson) and Moonstruck (Grace Ellis/ Shae Beagle). Would you say there are any stories that inspired these comics or speak in conversation with it?

ParaNorthern has been in my head for a really long time and it’s definitely influenced by a lot of different things, again not necessarily all comics (despite how much I adore comics). As I mentioned, Monty Python is a big one as well as (probably obviously) a love for Halloween. Sabrina the Teenage Witch has stuck with me over the years, too; both the sitcom show as well as her stories from the Archie digests. I’ve always been really interested in the idea of magic in our own world and then in other supernatural parallel worlds, too. So, I guess in that regard, The Chronicles of Narnia, The Golden Compass, and Tamora Pierce’s epic series are all things that helped influence me too.

A lot of stuff has come out since I originally sold ParaNorthern though, and I think graphic novels like Snapdragon by Kat Leyh and The Okay Witch by Emma Steinkellner and Fake Blood by Whitney Gardner are all titles that are a few of its wonderful kindred spirits.

What would you say are some of your favorite craft elements to work on?

Creative procrastination. As in working for two minutes and then going on Twitter for 20. Okay, but seriously, I love practicing short stories and testing my boundaries for what I can do and what I enjoy (or don’t enjoy) working on. Short stories are such a fun challenge and flexing those muscles where I play around with different voices, styles, and genres are really rewarding and help to keep me growing as a creator. I especially love a good silent comic where you try to write a story without any dialogue or narration and just provide the best art direction possible to let that tell the story. Someday I want to take that over to a long-form project.

It varies from creator to creator, but I think the big thing to always remember is it’s a collaborative medium. It’s really important that you think of your entire team throughout the process and how everyone can shine. For me, I always start with really extensive outlines that break down the story into point form beats. This helps me work out plot holes, further develop characters, and answer questions that will help make the story more satisfying to the reader in the long run. Figuring that out as much as possible in advance of scripting helps to solidify the story in my mind, give me a guideline to work off, and helps narrow down the number of script drafts I’ll ultimately have to do.

I’ve been really into art for most of my life, and I draw for fun and have always been a pretty visual person. For  me, when I do go to the scripting phase, I’m able to really see the page and panel layouts as I write. With middle grade stories, it’s important to keep the panel count low to 4-5 panels per page to help keep the attention span of young readers. You go in with that in mind and how many panels and pages it’ll take you to convey certain beats. The important thing is to make sure you’re not writing multiple actions in one panel. If you’re writing “and” in your panel description, you have to check yourself to make sure it’s not describing something else the characters are doing.

In a more general way, I try to give as much description as needed without over directing. I want the artist to be able to interpret the page and add their own spin on it or feel that they can change things up to an angle or shot that might be better suited. Typically though, the artist doesn’t see the script until the final draft is done. You just have to do everything in your power to be a good collaborator in advance of that.

Practice, practice, practice. If you keep putting off starting, you’ll never find the time for it. If you’re a writer who doesn’t draw, you don’t need an artist to practice writing scripts and telling stories. Work on short stories, pitch to anthologies, join a writer’s group to connect with other creators and get inspired (this bit all applies to artists, too!).

It can be a hard industry to break into, but the good news is that these days, you’re not beholden to publishers to find your way in. You can make zines, webcomics, or you can self-publish or crowdfund a project. Don’t wait for someone to discover you; take your creative dreams into your own hands!

Are there any project ideas you have that you are at liberty to discuss?

GOSH, I WISH I COULD TALK ABOUT NEW THINGS! But hopefully soon. That being said, something that is announced is my first YA graphic novel called Pillow Talk with art by Mel Valentine. It’s about an underground pillow fighting league and how a self-conscious young woman finds it, falls in love with it, and uses it to come out of her shell. I’m so proud of it and it’s not out for a little while still (fall 2023) but I really hope people will check it out when it gets here. It’s full of beautiful diverse characters, body types, sexualities, and more! Mel is a master at that, and I can’t wait for people to see their amazing work.

THERE ARE SO MANY THAT I LOVE, I could honestly go on forever! But those are a few more recent ones that I thoroughly enjoyed and wholeheartedly recommend.