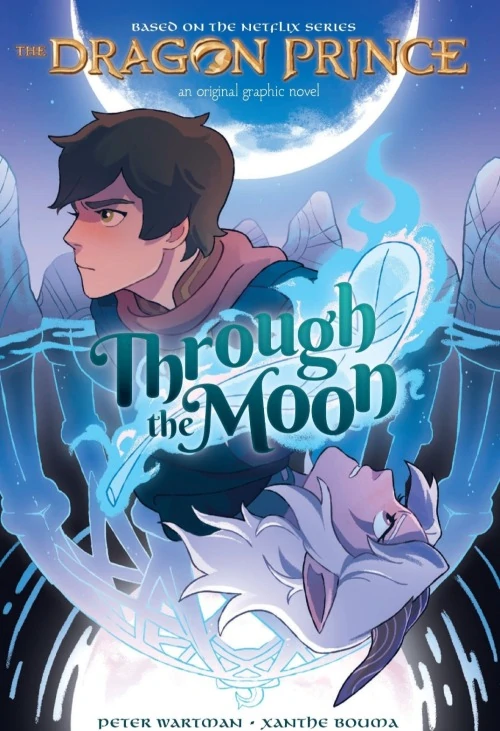 Peter Wartman has been drawing monsters, robots, and spaceships since he figured out how to hold a pencil. He lives in Minneapolis, Minnesota, where he works as a designer by day and a comic artist the rest of the time. Xanthe Bouma is an illustrator based in Southern California. Their work includes picture books, such as Little Sid, fashion illustration, and comics.

I had the opportunity to interview to both Peter and Xanthe on their latest project at Scholastic, The Dragon Prince: Through the Moon, which you can read below.

First of all, how did you get assigned to work on this comic? How aware were you of the show prior to working on Through the Moon?

PW: I was already a fan of the show! It’s absolutely the kind of story I love, and I hopped on it as soon as it was available on Netflix.

I honestly have no idea how I got the project – I just got an email one day asking if I’d like to work on it. I assume they found me through my work on the Avatar comics or my creator owned work (Over the Wall and Stonebreaker).

XB: One of the senior designers at Scholastic approached me, having known my work. She thought I might be a good match for the book, and since I got really into the show around the season 2 premiere and made a bunch of Dragon Prince fanart, I was, of course, stoked.

You’ve been a writer and an artist for quite a few fandoms before, including Avatar the Last Airbender, What was the process like working on a story with an already established universe? What’s it like balancing keeping consistent with the story’s original voice while including your own elements? Would you describe it as writing professional fan-fiction?

PW: The great thing about starting with an established universe – especially a fantasy universe – is that you can skip all the setup. No need to introduce the characters or magic systems or anything else; the readers will already be familiar with what’s going on, and you can jump right into the story. I was lucky in that Through the Moon touched on a lot of themes I’m already interested in (although I can’t really get into specifics without spoilers), so I didn’t find it too hard to work that in. My biggest goal was just to keep true to the characters – if they feel right everything else should fall into place.

The biggest difference from fan-fiction is that I was working closely with the show runners. It was based on a story outline they provided and we went through a lot of revisions and edits to make sure everything fit. Otherwise, yeah, the experience is probably pretty close.

As an artist who has drawn their own original works and collaborated with other writers and artists on their property, how would you say the artistic process varies? What stays the same?

XB: When I’m working on something alone, it’s a lot of hats to wear and they don’t always fit… so I try to trust my sensibilities while still being self-critical. Collaborators will take some of that load off. They notice and do things I can’t, so what stays the same is having trust, I guess – relinquishing some artistic control and trusting them with their strengths as part of the process. What those strengths are and how other artists, writers and editors play to them is the different part. I get to learn other people’s creative language and hope they’ll be willing to learn mine, which is very different from being in my own head. That and I’m a little neater when I share sketches with other people…!

In terms of The Dragon Prince timeline, Through the Moon, takes place between the end of season 3 and the unreleased season 4. How would you say the events that take place in the graphic novel affect future storylines?

PW: I have no idea! I’m excited to find out.

XB: It seems especially emotionally affecting, particularly for Rayla and Callum. The whole team composition changes going forward in the show now, right? Things can’t really go back to how they were before. I was excited when I finished reading the script because I was like “WHAT does this mean for them next?!”

What were your favorite characters to write/ draw and why?

PW: Rayla is my favorite character in the Dragon Prince – I think her struggles trying to figure out where she belongs / where she comes from resonate the most with me.

That, and she can parkour everywhere, which is neat.

XB: Indulging in the Rayla/Callum interactions, because I’m a sap. Absolute favorite was drawing sad Soren, that was truly fulfilling. Peter wrote such an emotionally complex moment for him!

What drew you to the comics medium? Do you remember the stories that first inspired you as creatives?

PW: I honestly think the biggest thing about comics for me is that its the only visual storytelling medium that you can conceivably do on your own or as part of a small team. I’m also fascinated by some of the weird things in the language of comics – the way time passes in panels on a page, for example, is very strange, and it’s kind of magic that it all works.

The first comic I can think of that really opened my eyes to what was possible in the medium was Hellboy. Otomo’s Akira was also mind-blowing. Neither of those were the first comics I read, but they were what made me fall in love with the medium.

XB: Garfield and CLAMP… which maybe explains everything. Basically, Sunday strips like Calvin and Hobbes got me interested, then discovering shoujo manga, BL, and webcomics kept that going. When I was 9, I read this punk pamphlet about how anyone can make a zine so then I was like “okay… time to self-insert me and my friends in an original Digimon comic and distribute it at school.”

What advice do you have to give for people working on their own projects/ wanting to enter the comic book industry?

PW: It’s a marathon, not a sprint. It took me seven years from graduating college until I started making enough money to live off comics full time. What’s more, every path in comics is different, and the industry is always changing, which makes giving advice hard. That said, you can’t go too wrong making work that you love, and I think it’s essential to reach out to your peers and stay connected.

Also: never sign a contract without getting a someone to look over it first.

XB: Comics take long and often don’t pay well, so make the art/stories you earnestly enjoy making for whatever reasons feel right to you and share with the communities you want to speak to. That said, not everything that comes along will be a dream job. That’s fine – even in art, sometimes work is just work. Choose your battles, know your value, read your contracts, take care of yourself!

XB: I’ve been working on the sci-fi adventure series 5 Worlds for the last six years… and we are about to finish the final book, The Emerald Gate! So that’s a huge conclusion. Can’t report much beyond that, but I can say I’m working on developing my own stories next. Yeehaw!

Finally, what comics/books would you recommend to the readers of Geeks OUT?

PW: A comic I’ve been thinking about a lot lately is Miyazaki’s Nausicaa (which the film is partially based on). It goes in a lot of cool and weird places that I think fans of the Dragon Prince will enjoy, and it’s only two volumes long.

XB: I revisited SuperMutant Magic Academy by Jillian Tamaki recently! The Prince and the Dressmaker by Jen Wang is an amazing book. This Is Not Fiction by Nicole Mannino is a fun rom-com that’s free to read online. A favorite contemporary manga: Dungeon Meshi by Ryōko Kui; and, finally, a favorite classic manga: Rose of Versailles by Riyoko Ikeda.