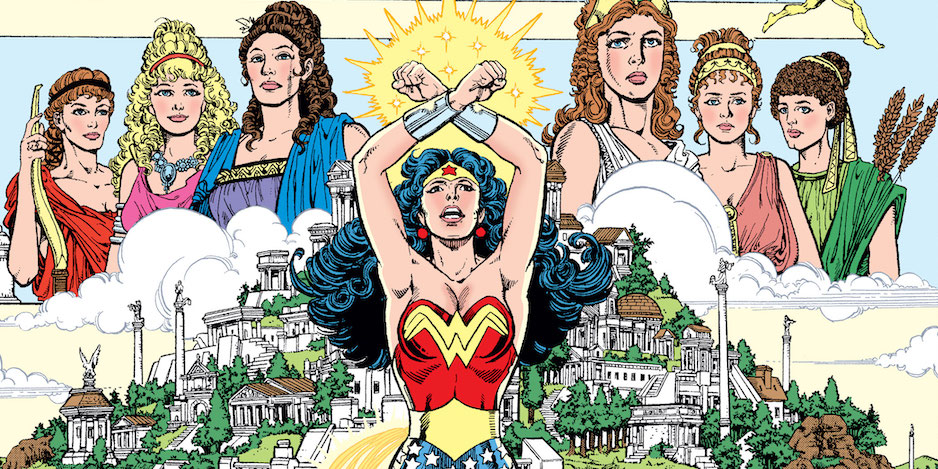 Wonder Woman was co-created by William Moulton Marston and H.G. Peter. She first appeared in All-Start Comics #8 in 1941. Some of us know Wonder Woman from her origins in comic books. Stories crafted by the likes of George Perez, Jose Garcia Lopez, Phil Jimenz, Greg Rucka, and John Byrne. Others remember her from the 1970’s hit TV show portrayed by Linda Carter or from the Super Friends Saturday morning cartoon from the seventies and eighties. Younger generations remember her from the Justice League and Justice League Unlimited shows. And now a whole new generation is experiencing the Princess of Theymyscyria through Gal Gadot portraying Wonder Woman in Zack Snyder’s Justice League and Patty Jenkin’s Wonder Woman films

However you’ve encountered Wonder Woman for the first time, it cannot be said enough that she has always been a hero for all of humanity and even more, a true purveyor of peace, truth, and building bridges. This may seem pretty basic, but it is still a revolutionary perspective in 2021.

Recently, I had the opportunity to ask a few of the creators who have had a hand in shaping Wonder Woman in her comic book exploits-writer Steve Orlando, artist Emanuela Lupacchino and all-around Rennaissance Woman, writer-artist, Amy Chu. And one super-fan who loves Diana more than anyone I know. But also embodies Wonder Woman’s ethics and mindset, Lego Master, Sam Hatmaker.

Chris Allo: What was your first exposure to Wonder Woman?

Orlando: Undoubtedly it would’ve been the DC Cosmic Card series, which was my first exposure to nearly all DC characters. We didn’t have a comic store in my town at first, so I would get back issues at the flea market, and snag all the non-sports cards I could at sports memorabilia shows, where I’d accompany my parents. I was instantly taken with Diana. Especially, oddly enough, the elegance of her Golden Age design. And once I got into DC books in the mid-90s, when we got a Waldenbooks and a comic store, Diana was front and center — battling nazis, becoming the goddess of truth itself, and kicking the shit out of White Martians. It didn’t take long for me to be sold for life.

Orlando: I think it’s because of the clarity of her message — love over hate, peace over war…and a swift hand for those that refuse those edicts. These were challenging ideas when she was created, and they’re challenging, radical, subversive ideas even today. We know that no matter what we’ve done, who we are, Diana will be there to offer love, IF we’re strong enough to take it, IF we’re strong enough to admit our faults and mistakes, she is there with compassion. And we know for those who fall to violence and hate, the weaks ones, that Diana will be there to defend us. Wonder Woman, through a myriad of lenses, is STILL a book about the devastating, transformative power of love. And that’s a message, and a character, who will always be relevant.

Chris: Do you have a favorite storyline and or creative team?  One that inspires your work on the character?

Orlando: I think the closest inspiration for me is Phil Jimenez’s run as writer and artists. Phil and I think very much along the same lines with Diana, even if he’s an angel and I’m a devil. But as a reader, I instantly loved how provocative, how radical, how strong and welcoming Phil’s Diana was. She wasn’t just a classic greek hero, screaming into battle with sword drawn. She DID draw sword, but only when there was no other recourse. And she understood that peace is radical, peace if frightening, and peace is the highest aspiration. She wasn’t naive, she knew this would anger the power structures around her, and she was ready to fight against them. These are ideas imbued in every panel and line of WONDER WOMAN when I’m working on it, and I owe that to Phil.

Chris: Since she is a comics Icon, what is one of your favorite images and or artists that have portrayed the character?

Orlando: Good lord, there are so many! Outside of Phil’s Diana, I would be remiss not to mention the incredible work of artists like Colleen Doran, Ramona Fradon, Nicola Scott, Jill Thompson, Joshua Middleton, Jenny Frison, Gil Kane, Adam Hughes, and when we’re lucky enough to see her draw Diana — Joyce Chin.

Chris: I can add a few to that amazing list! I was working with Joyce recently and mentioned to her your comment, she was so humbled and was surprised anyone even remembered that she drew Wonder Woman.

EL: My first experience with the characters was 10 years ago or so, I worked on a cover with Wonder Woman and I suddenly had a great feeling drawing the character. It was a powerful action scene and I remember how naturally it came to me drawing her.

EL: Wonder Woman is a superhero where principles and love come before the superpowers. She may change her look through the years but she keeps some good ideals immutable. I believe she touched the heart of the people as she was born as female superhero and what made her such a great character was her personality over the powers. That personality is still there as it was at the beginning. Iconic.

Chris: Do you have a favorite storyline and or creative team?  ONe that inspires your work on the character?

EL: My favorite creator is Jose Garcia Lopez, I believe he’s the most representative author of the character. And his art is as iconic as the character itself.
I do love some of the covers Adam Hughes did for the series, his work was a great inspiration for me as much as Garcia Lopez. I love his touch of power on the character keeping it graceful and elegant at the same time.

Sam Hatmaker: I first fell in love with Wonder Woman in 1977 when Lynda Carter introduced the character to the world.  I spent the next few years spinning around and becoming powerful when I felt weak.  I have a 2” scar across the bottom of my chin from spinning around in the bathtub.

Chris: Why has the character endured so long? She’s an Icon now!

Sam Hatmaker: The character has evolved with time, always finding a message to empower women and the disadvantaged.  That keeps her relevant.

Chris: What is your favorite storyline or creator on WW?

Sam Hatmaker: George Perez inspired my love of the character and the Greek Gods.  He made her a character of peace first and foremost.  She is one of only a few characters in comics whose first choice is defense, not offense.  Her weapons are defensive.  Bracelets to deflect attacks, and a lasso that binds the opponent so they can not fight, and forces them to communicate the truth.  My favorite stories were solved with her forcing the enemy to examine themselves and their motives.

Chris: Any standout or favorite image/artist depiction of Diana?

Sam Hatmaker: I have a few.  I own one of the original 1980’s style guide pictures by Jose Luis Garcia Lopez.  I love George Perez and Phil Jimenez’s drawings of her.

Greg Silber: What is your first experience or exposure to WW?

Amy Chu: Oh you know what, I did read the Wonder Woman comics when I was a kid for sure. Because I was also watching the TV show with Linda Carter. That was huge. I would say that was formative. So there was that, and in fact, if I think harder, there was a lot of classic Wonder Woman I was reading at the time.

AC: Yeah. I remember because with all the bondage stuff, as a kid I was like “what’s with all the chains?” [Laughs]. Now I’m like “oh, okay.” So yeah, I would say I grew up with Wonder Woman.

GS: Why has the character endured so long? She’s now an icon of mythic proportions!

AC: First of all, how many woman characters were there like 80 years ago? She was very powerful. The character of Wonder Woman is someone we aspire to. She’s powerful, and there’s a quality about Wonder Woman that endures today. Part of it is that she’s so much of a legacy character now, right? It’s great that there are so many new female characters now, but with Wonder Woman, there’s a certain universe that owes everything to her. And she’s from that sort of Amazonian idea as a woman. It’s very appealing! I think it’s also kind of funny that… look, it’s an island full of women. The idea that they’re all heterosexual is kind of odd, right?

AC: I never thought of it that way but… yeah. That sort of appealed to me.

GS: What is your favorite storyline or creator on Wonder Woman?

AC: Wow, I’m going to get in trouble here. Because there are so many good ones. I will say that working with Bernard Chang on my first Wonder Woman comic, I specifically asked for Bernard. That was Sensation Comics. I don’t want to point to any specific arc because there have been some really good ones, obviously. I will point to Gail Simone and Greg Rucka, they’re all good. I won’t point out some duds that I bought.

GS: Any standout or favorite image/artist depiction of Diana?

AC: Okay you know what, I will point to the (Brian) Azzarello/Cliff Chiang stuff. I am a big fan of Cliff Chiang’s work. It’s so funny. With Brian Azzarello, it’s not like I know him that well, but I saw him at the Comixology party and he was like “hey Amy!” I love his writing in general. I’m not going to say one over the other, but it really did make a difference when I was reading that arc.

Chris Allo: I want to add that two of my favorite artists who have drawn Wonder Woman over the years are Brian Bolland-who give Phil Jimenez a run for his money on drawing Diana’s raven locks. Bolland portrayed her as powerful and almost mythical at times. And second is Terry Dodson, one of my all-time favorite artists, who depicts Wonder Woman as with a more muscular frame than most, but manages to retain her feminine beauty while showing the powerhouse aspect that is equal to Superman.

I also wanted to take a moment to thank ally, Greg Silber for helping out on this interview. Gregory Paul Silber is a writer and editor with bylines at PanelxPanel, The Daily Dot, NeoText, Shelfdust, and more. His humor column, “Silber Linings,” appears every Friday at The Comics Beat. Follow him on Twitter and Instagram @GregSilber.”

See you next time!