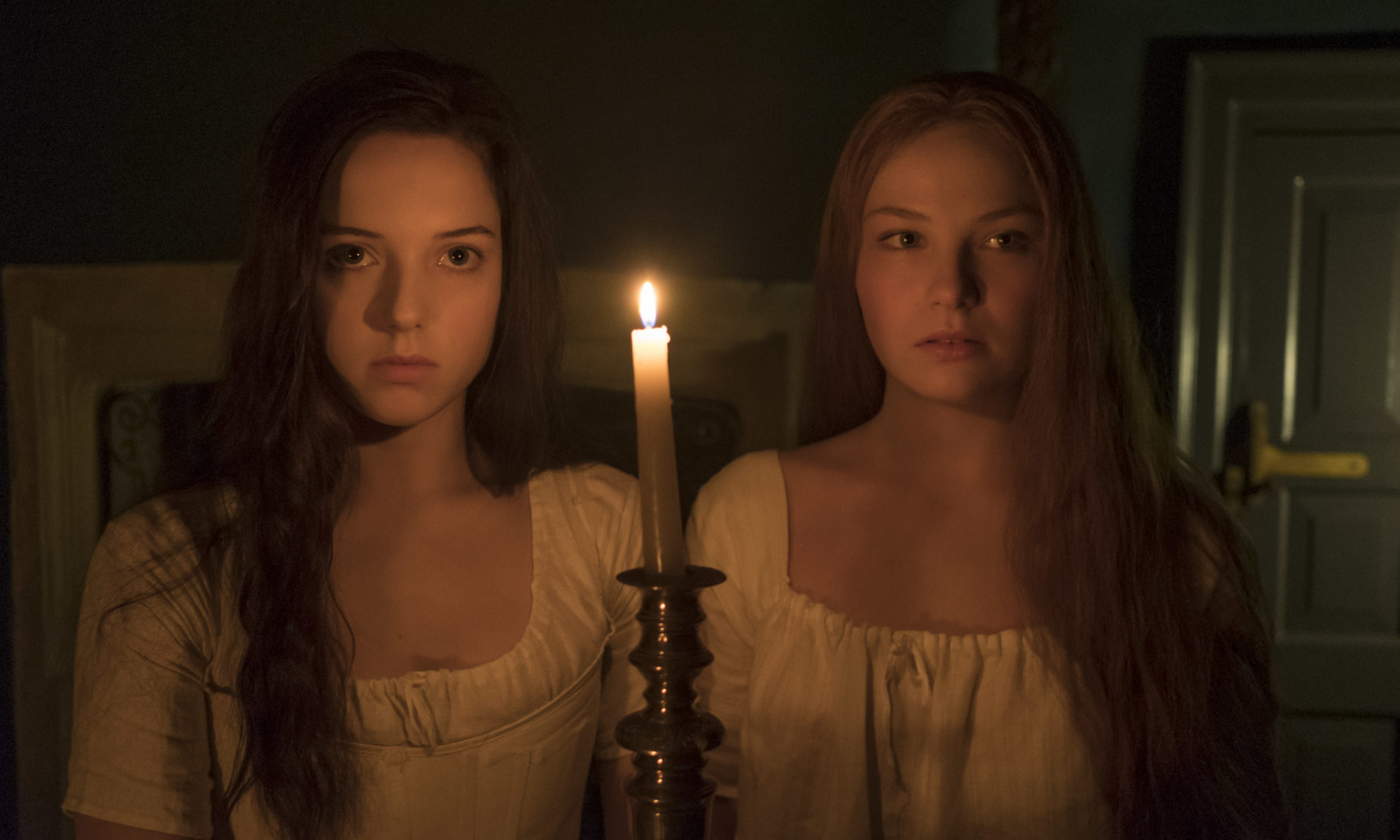 It feels like it’s been a few years since we had a good old fashioned Victorian horror film; perhaps not since Guillermo Del Toro’s underrated Crimson Peak.  So the moody, intelligent Carmilla (inspired by the gothic novel by Sheridan Le Fanu) is a welcome addition to the genre—not to mention a queer one!

Writer/director Emily Harris’ film immediately makes a strong impression with gorgeous cinematography and a vivid locale.  Teenage Lara (Hannah Rae) lives a lonely existence in an isolated mansion.  Her well-meaning governess Miss Fontaine (Jessica Raine) is caring but strict; her father is usually away on business.  More than anything, Lara wants a friend, and one finally arrives in the form of Carmilla (a gorgeous Devrim Lingnau), who the family takes in after she survives a mysterious carriage crash.  The two immediately form a close bond that develops into a romance, but there may be more to Carmilla than meets the eye

Carmilla is essentially a drama with horror elements, a character-driven film that showcases terrific acting from all three of the women featured.  Rae and Lingnau come across as genuine teens, not the twenty-somethings who play high schoolers in so many movies and shows, and their performances feel wonderfully authentic.  Raine, meanwhile, is outstanding in her role.  She comes off as fully three dimensional and compassionate despite her old fashioned beliefs and strict rules for Lara.  In one standout scene, she hints at her own same sex attractions while trying to steer Lara away from her feelings for Carmilla.

Lara’s growing attraction to the other girl gives way to a tender eroticism.  Harris does a terrific job of capturing their chemistry and generating heat; it’s a rare treat to see any kind of love scene in movies these days, and all the sweeter to have ones involving two women.  There’s also a moment of unexpected and powerful sexuality between two other characters late in the film.

Carmilla is a dynamic and well-crafted movie, pleasingly ambiguous and understated with its horrific elements.  When things get creepy it feels organic – Lara has some morbid interests and fantasies, which Carmilla appears to share–and in keeping with the serious tone of the film. The movie is brimming with interesting motivations and relationships, and keeps you involved all the way through its poignant finale. 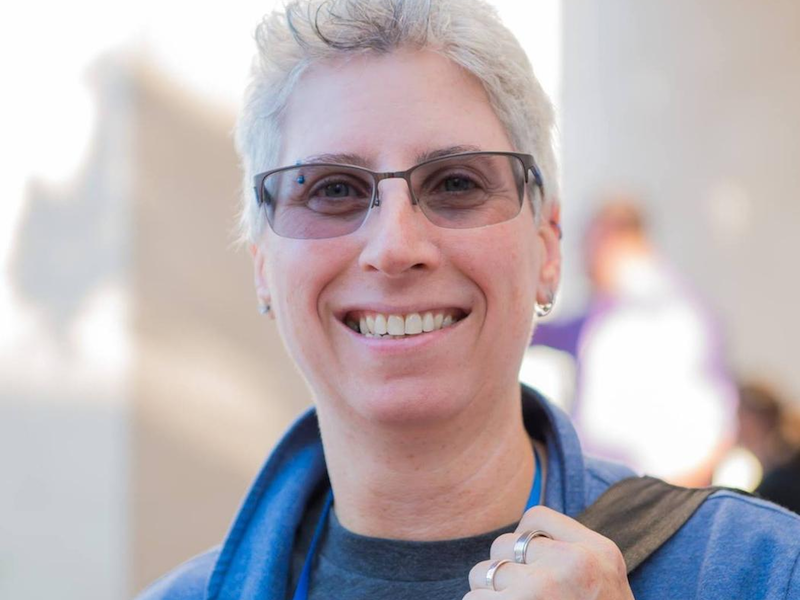 Erica Friedman is the Founder of Yuricon, a celebration of yuri (lesbian-themed) anime and manga held in New Jersey from 2003 to 2007 that now exists as an online entity,  as well as the founder of ALC Publishing. She describes herself as an LGBTQ and Geek Marketing Consultant, and a proud holder of a Masters degree in Library Science. Last year, Geeks OUT welcomed her as a presenter at Flame Con, and we finally caught up with her to learn more about what she does and why she does it.

As the founder of Yuricon, how would you describe the responsibilities of your profession?

Yuricon as a community was founded almost 20 years ago on Usenet. We’ve had community spaces on every social platform since then—we had a mailing list that was founded in 2001 that we just closed up last year, MySpace, LiveJournal, now obviously Facebook, and I’m kind of thinking of starting up a Slack, but I’d need to get more admins than just me. I’ve run events in the USA and in Tokyo and traveled to events all over the world.

So a lot of what I’ve always done is promote and share and talk with folks wherever they happened to be, online or off. These days I most promote yuri by speaking at conventions (I was at Flame Con last year), school, and organizations.

How does yuri distinguish itself from other international queer female-centered comics, like Alison Bechdel’s Fun Home and Julie Maroh’s Blue is the Warmest Color?

Yuri is a genre of Japanese media, specifically manga and anime. Our Yuricon definition of yuri is “yuri can describe any anime or manga series (or other derivative media, i.e.: fan fiction, film, etc.) that shows intense emotional connection, romantic love or physical desire between women. Yuri is not a genre confined by the gender or age of the audience, but by the perception of the audience. In short, Yuri is any story with lesbian themes.”

What are your current favorite examples of yuri manga (or other media)?

Most of my top series aren’t out in English, like Collectors by Nishi Uko or Gunjo by Nakamura Ching. But I recommend Sweet Blue Flowers, by Takako Shimura from Viz Media and Kiss and White Lily for My Dearest Girl by Canno from Yen Press, which are out in English. In fact, I have a whole category of English manga on my blog Okazu and a category for Top Series of each year for folks who want some titles to take a look at.

In any fandom, there’s a bias toward male-centered narratives, even within queer fandom. Why do you think this is?

Men largely hold the social, political and financial power in all facets of society. They’ve got the purse strings, so obviously they dictate the terms. This is true globally. It’s not really anything to do with straight or gay. When women have equal access to money, they will tell their stories. As we’ve started to see in film. A lot of the editors in Japanese manga are women, but men run the companies.

Currently, there are several queer-themed anime events all over the country (because so much of the fandom in the US is queer folk) but relatively little canonically queer anime being produced. How do you think we can bridge this gap?

There’s so much more queer-interest anime than ever before. I mean, like amazing amounts. Yuri series Asagao to Kase-san (published in English as Kase-san) and Morning Glories by Seven Seas) is getting an anime OVA theatrical release in Japan, Yuri comedy Love to Lie Angle is out now and is streaming free and legally on Crunchyroll, Yagate Kimi ni Naru (Bloom into You in English from Seven Seas) has just been green-lighted as an anime. That’s three major releases in one year. That’s amazing.

But like the previous question, the answer is: money. The presumed market for anime is men. Straight men. Just like the presumed market for movies in the USA is men. It doesn’t matter that women make up a huge portion of the existing market and there’s an untapped market, white men make movies for white men, and do not understand how to react when movies about black people do well. When something like Free! makes a ton of money in Japan, the male-run studios make another Boy’s Love-ish series and then squeeze that stone. They don’t open up a division to make a dozen BL-audience appealing anime.

The US audience is not making anime, so we cannot change anything in relationship to this. As fans we can buy what we want to see more of. It lets the companies know what the market wants. That is the only power of influence fandom has.

How would you describe the current culture of LGBTQ fandom in the US? Is it different now then it was when Yuricon first originated?

It’s different of course. One of the things we’ve achieved in these last two decades is the creation of a whole new genre! Twenty years ago, yuri did not exist as a separate genre. It was assumed to be the opposite side of the coin from BL, which it isn’t. BL is a genre that has an assumed homogeneous audience of straight women, where yuri came in different forms, with different tropes from all of the different demographic genres of manga. So BL tropes exist to appeal to one specific audience, and yuri tropes appeal to various audiences varying ways.

The fandom has itself changed in age and identity. Younger people are more likely to identify as queer, less likely to have negative feelings about gender and sexuality in media. Anime fandom has mostly been young and open, in my experience, but it’s even more so, now.

How much do you believe queer representation in manga and anime is realistic or authentic in its portrayals of women?